We are so used to discussing the negative effects of static electricity, we thought it about time we should discuss the positive impact it can have on your everyday life.

Did you know that every time you touch the screen of your mobile to open an app you are using the power of static electricity and since the typical mobile user touches their phone 2,617 time every day, according to a study by Dscout, that is a lot of static energy.

Most mobile phones have a capacitive touch screens which is constructed from materials like copper or indium tin oxide that store electrical charges in an electrostatic grid of tiny wires, each smaller than a human hair. When a finger hits the screen a tiny electrical charge is transferred from the finger to complete the circuit, creating a voltage drop on that point of the screen. The software processes the location of  this voltage drop and orders the ensuing action.

Whilst they are becoming less common in the digital age, original analogue photocopiers used static electricity and light to create copies. The first plain-paper office copier was produced in 1960 by Chester Carlson and has been called the most successful product ever marketed in America.

Photocopiers consisted of a drum or belt covered with a layer of photoconductive material. A photoconductive material conducts electricity when struck by light.When the copier illuminates the sheet of paper on the glass surface of a copier, a pattern of the image is projected onto the positively charged photoreceptive drum below using static electricity. Light reflected from blank areas on the page hits the drum and causes the charged particles coating the drum’s surface to be neutralized. This leaves positive charges only where there are dark areas on the paper that did not reflect light. These positive charges attract negatively charged toner. The toner is then transferred and fused to a positively charged sheet of paper.

The same basis is used on a larger scale by factories to reduce pollution coming from their smokestacks. Some car manufacturers use static electricity to help get a smooth paint finish to the car’s surface.

Electrostatic spray painting is a method that can reduce problems with uneven coverage and overspray that result from using a regular spray gun. The spray paint gun is charged positively, which causes every paint particle to become positively charged. Since the paint particles all have the same charge, they repel each other and produce a fine mist of paint which is sprayed towards the car. Usually the car being painted is metal and grounded, but almost any product can be finished electrostatically. The charged paint particles are attracted to the grounded car and stick to the body.

Once the paint dries, it sticks much better to the car and is smoother because it is evenly distributed. 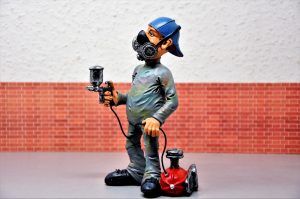 The magic of static electricity

Unfortunately whilst we can’t ignore the dangers of static electricity, it is important to recognise that it plays a positive impact in our everyday lives. Now where is my phone!

Posted in Electroguard Blog, Uncategorized
← How to prepare your floor for anti static paintIs a concrete floor anti static? →